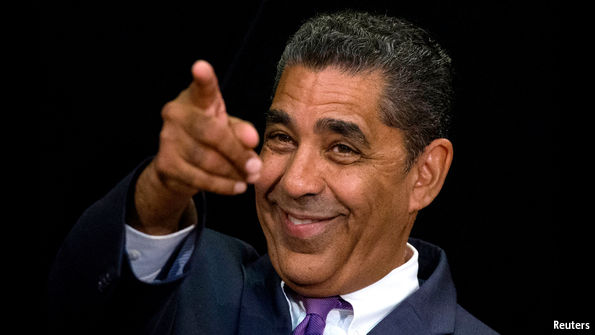 AT A packed sangria bar in Washington Heights, a neighbourhood in upper Manhattan, supporters of Adriano Espaillat danced and waved Dominican flags as they waited to hear the results of a primary election on June 28th. Mr Espaillat declared victory the same evening, but it was a full two days until his rival, Keith Wright, conceded. The winner will represent the Democratic party in the November election for New York’s 13th congressional district. The district is heavily Democratic; Mr Espaillat will therefore almost certainly go to the House of Representatives.

Mr Espaillat arrived in America from the Dominican Republic when he was nine years old. He had no papers. He will be the first non-black person to represent the district since 1944, the first Dominican-born immigrant to sit in the House and first congressman to have entered America as an undocumented migrant. The district is home to migrant populations from Dominican Republic, Senegal and Bangladesh. Dominicans from all over the New York region, including across the river in New Jersey, helped campaign for Mr Espaillat. His victory is an...Continue reading advertising in Armenia advertising in Armenia