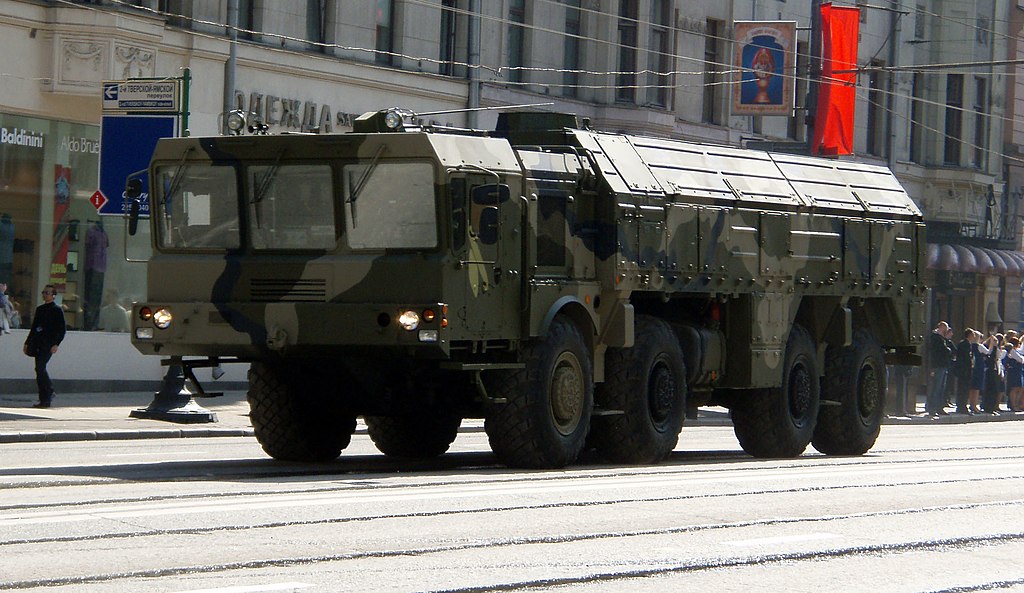 Armenian Armed Forces have been supplied with the Iskander-E export modification, which boasts a range of 300 km.

The missile system was displayed during the military parade on the 25th anniversary of Armenia.

Iskander-M complexes have some 500km range, and the Missile Technology Control Regime bans the export of missiles with over 300 km range.

No exact amount of Iskander systems is known to have been shipped to Armenia, but Vedomosti newspaper said days earlier that a division of Isknader systems has been exported from Russia.

Also showcased during the parade were Buk medium-range surface-to-air missile systems, as well as Infauna and R-325 U electronic warfare systems.

The Iskander ballistic missile is superior to its predecessor, the Oka. The Iskander-M system is equipped with twosolid-propellant single-stage guided missiles, model 9M723K1. Each one is controlled throughout the entire flight path and fitted with an inseparable warhead. Each missile in the launch carrier vehicle can be independently targeted in a matter of seconds. The mobility of the Iskander launch platform makes a launch difficult to prevent.

Targets can be located not only by satellite and aircraft but also by a conventional intelligence center, by an artillery observer or from aerial photos scanned into a computer. The missiles can be re-targeted during flight in the case of engaging mobile targets. Another unique feature of Iskander-M  is the optically guided warhead, which can also be controlled by encrypted radio transmission, including such as those from AWACS or UAV. The electro-optical guidance system provides a self-homing capability. The missile's on-board computer receives images of the target, then locks onto the target with its sight and descends towards it at supersonic speed.

Boost phase thrust vector control (TVC) is accomplished by graphite vanes similar in layout to the V-2 and Scud series tactical ballistic missiles. In flight, the missile follows a quasi-ballistic path, performing evasive maneuvers in the terminal phase of flight and releasing decoys in order to penetrate missile defense systems. The missile never leaves the atmosphere as it follows a relatively flat trajectory. The missile is controlled during the whole flight with gas-dynamic and aerodynamic control surfaces. It uses a small scattering surface, special coatings and small size projections to reduce its radar signature.

The Russian Iskander-M cruises at hypersonic speed of 2100–2600 m/s (Mach 6–7) at a height of 50 km. The Iskander-M weighs 4615 kg, carries a warhead of 710–800 kg, has a range of 500 km and achieves a circular error probable (CEP) of 5–7 meters. During flight it can maneuver at different altitudes and trajectories and can turn at up to 20 to 30 G to evade anti-ballistic missiles. For example, in one of the trajectory modes it can dive at the target at 90 degrees at the rate of 700–800 m/s performing anti-ABM maneuvers. The missile is controlled in all phases.

Iskander has achieved sufficient accuracy, range and reliability (ability to penetrate defenses) to function as an alternative to precision bombing for air forces that cannot expect to launch bombing or cruise missile fire missions reliably in the face of superior enemy fighters and air defenses. Training and competence requirements are much lower than for normal air force assets such as a fighter bomber squadron utilizing guided bombs.[citation needed]

Iskander is a tactical missile system designed to be used in theater level conflicts. It is intended to use conventional or nuclear warheads for the engagement of small and area targets (both moving and stationary), such as hostile fire weapons, air and antimissile defense weapons, command posts and communications nodes and troops in concentration areas, among others.
The system can therefore destroy both active military units and targets to degrade the enemy's capability to wage war.
In 2007, a new missile for the system (and launcher), the R-500 (range of applications up to 2000 km and more) cruise missile, was test fired. Now complex "Iskander-M" is transmitted to the troops complete with cruise and ballistic missiles. In 2013, army missile brigades first received missiles equipped with a new control system.

When approaching the target false targets and small jammers separate from the rocket. The missile uses stealth technology. Iskander-M also carries a complex of electronic warfare jamming devices, both passive and active, for the suppression of the enemy's radar.

The system can be transported by any means of transport, not excluding airplanes.
The maximum power for the nuclear warhead is 50 thousand tons of TNT (Iskander-M).