Recently we traveled to Armenia and discovered so many interesting things about this beautiful country!

1. Chess is a compulsory subject in schools

Interesting huh? All students have to take chess as a compulsory subject in school and there are even exams for it! The photo below shows the renowned Tigran Petrosian Chess House in Yerevan where many huge international chess tournaments have been held. 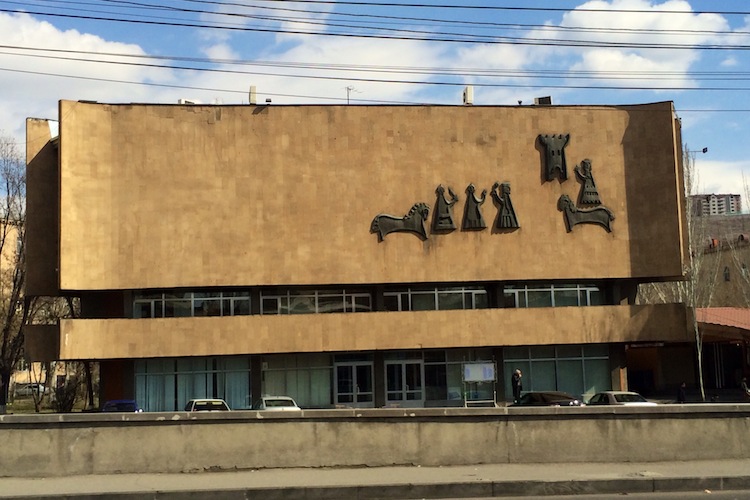 Can you spot those chess pieces?

2. Armenia was the first country to have adopted Christianity as its state religion 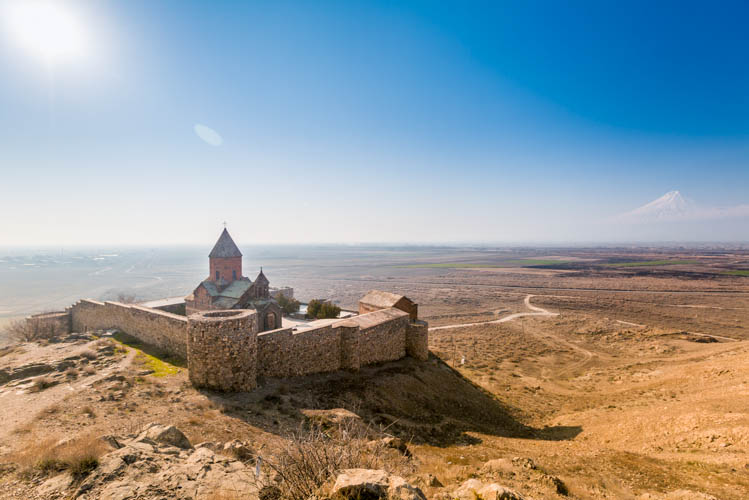 3. Armenia is one of the only mono ethnic countries in the world

97% of the people living in Armenia are Armenians and the remaining small percentage is made up of different ethnic minorities such as the Yazidis, Russians, Ukranians, Kurds, and more. 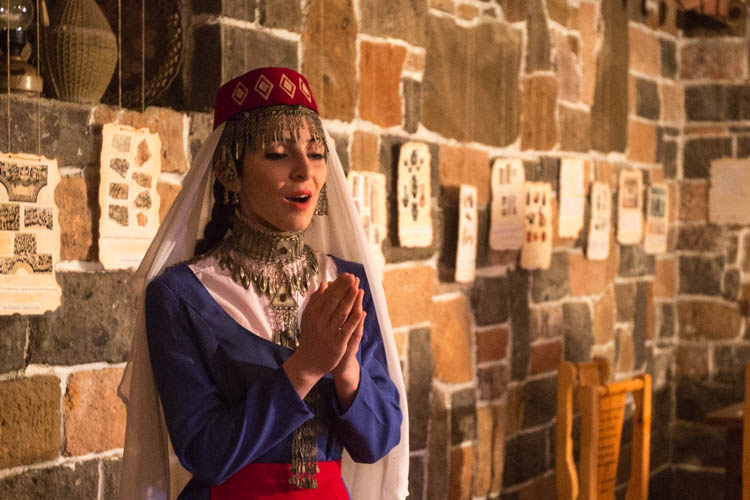 4. The first church in the world was built in Armenia

Holy Etchimiadzin was the first state church built in the world back in the early 4th century. This place is also the headquarter of all the churches in Armenia and it’s one of the most visited pilgrimage site in the world. Unfortunately this beautiful building has been under construction for the past few years and we were unable to capture a nice shot of it. 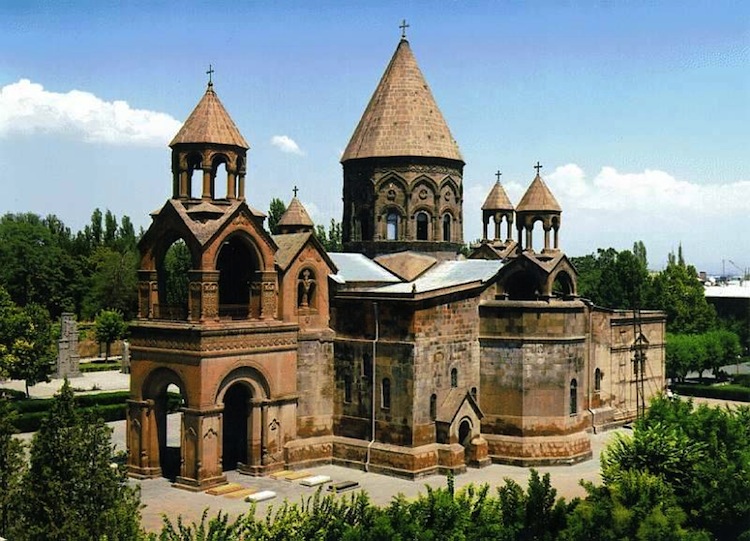 5. An estimated 1.5 million Armenians were killed during the Genocide

The genocide refers to the mass killings of Armenians that began under Ottoman rule in 1915. Coincidentally, this year 24th April 2015 marks the 100th year anniversary of the genocide. The Genocide museum was closed for a year for thorough restoration and will only be opened 2 days before its 100th anniversary. The genocide happened during and after first world war where more than 1.5million Armenians were brutally killed without any mercy by her enemy. The genocide happened in 3 phases, the first was when all the men were being called out to join the army and then killed (so that the rest of the population will not have any males to protect them), then next was the killing of all women, elderly and children, and the last was the intellectuals. 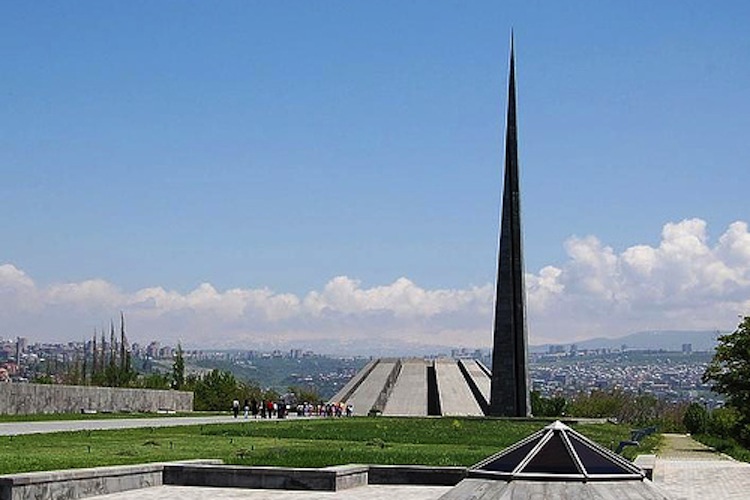 6. Armenia is one of the oldest wine producing country in the world

Armenia is one of the oldest country that has produced wine in the world. It’s attributed to its blessed location of being on the fertile valleys of Mt Ararat where high quality grapes could be grown. 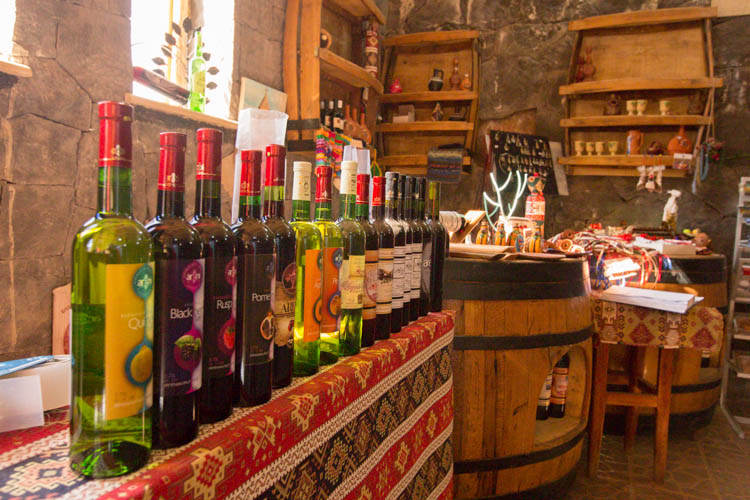 7. Armenians bake their lavash underground in a tonir

A tonir basically refers to an underground earth oven as shown in the photo below. Armenians love to eat lavash which is this thin layer of flat chewy bread that’s made from flour, salt and water and baked in a tonir. Lavash can be kept for 1 year without turning bad. So usually the local women will bake the lavash in bulk and then store them to eat slowly for the next few months. Armenians cannot imagine having their meals without bread! (Even if they’re eating rice, they’ll need to have bread with it too!) 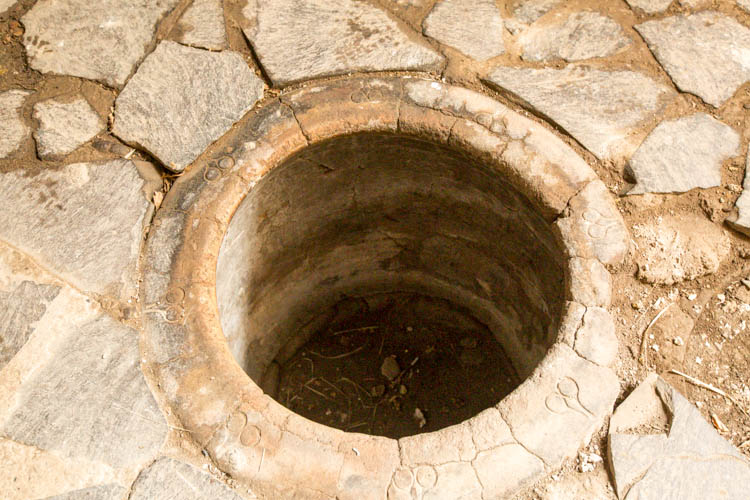 An example of an ancient underground tunir at the Geghard Monastery

8. The entire country worships Mt Ararat which is also the national symbol of Armenia

According to our guide, Mt Ararat protected Armenia from a super strong earthquake! They also believe that the peak of Mt Ararat was where Noah’s ark was found. But sadly, Mt Ararat is not even within the territory of Armenia at the moment. 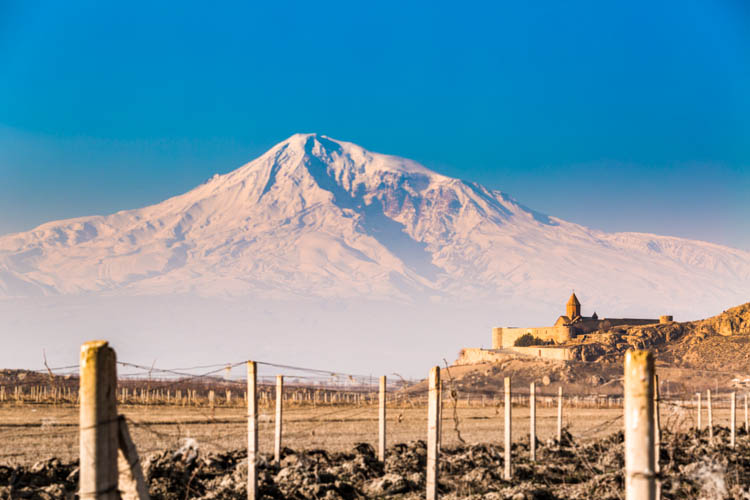 9. The apricot is one of the symbols of Armenia

The flag on the right in the photo below belongs to Armenia and the orange colour of the flag actually symbolises the apricot! That’s how significant apricots are to Armenia! And when you walk through the markets, you’ll find vendors selling apricots of all sort from dried apricot, fresh apricot, apricot flavoured wine, apricot juice and anything else that you can think of! 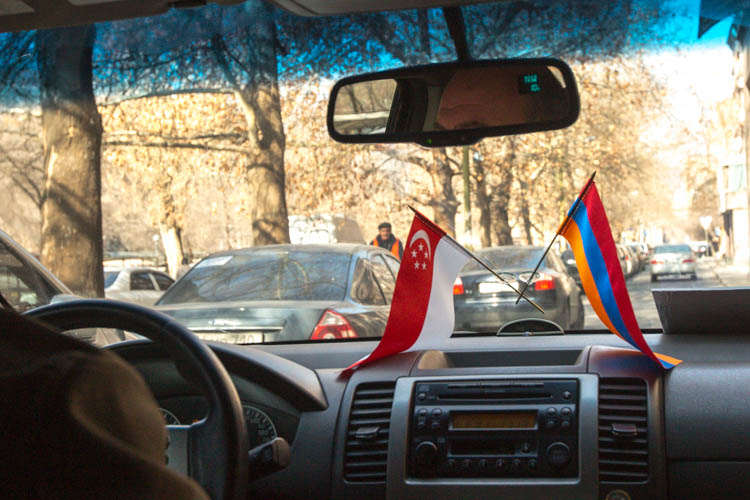 10. Yerevan is also known as the "pink city”

Yerevan is one of the most beautiful "pink city’ that we’ve ever been to, her buildings were all made of naturally coloured volcanic rocks of varying shades of pink, hence giving her the name "pink city”. 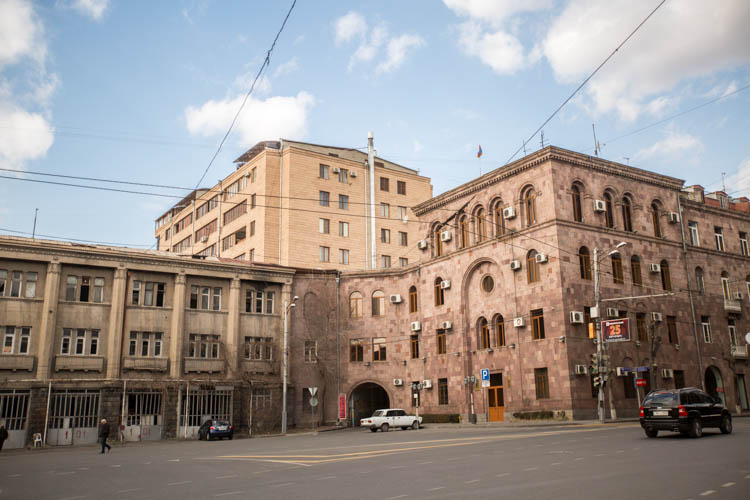 We were on our way to the Noravank Church when we passed by this village with a whole row of long wooden poles lined up neatly along the road and a huge stork’s nest on the top of each pole! It was so amazing! These storks migrate to Africa every year before the winter arrives and returns when it’s spring! We happened to be there when it was almost spring and some of the storks have already arrived back home to their nest. It was such a cute sight! Also, the nests were so huge that some other smaller birds such as the sparrows have made their own little nest out of the huge stork’s nest! (From the photo on the right below, you can see a few sparrows happily making their home in the stork’s nest) 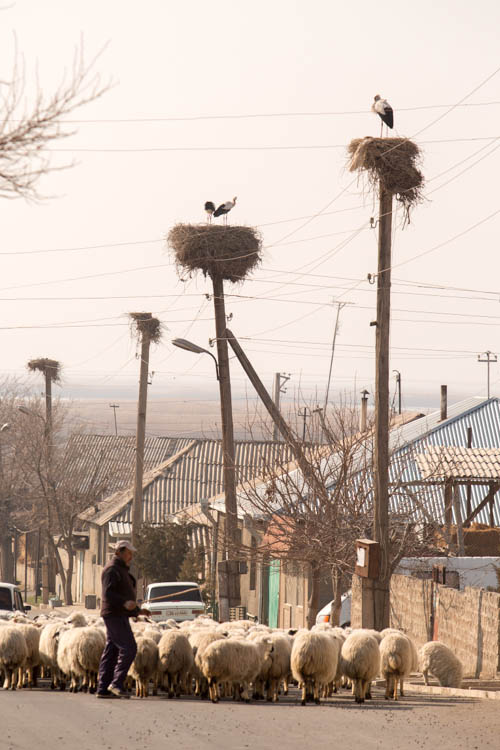 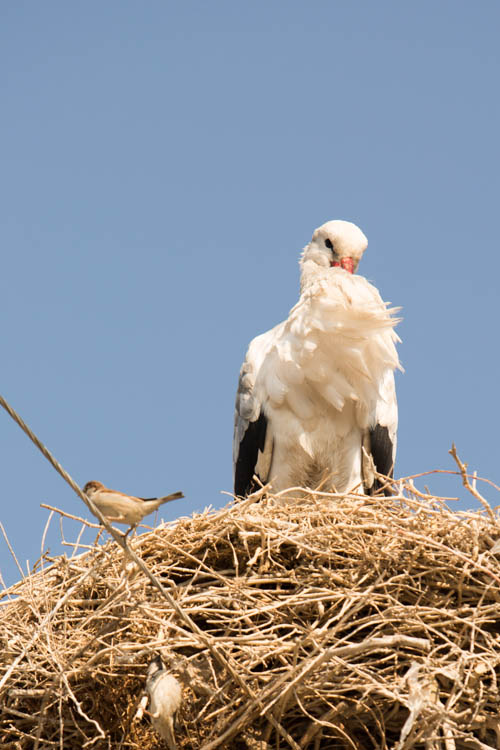 12. There is no discrimination between tourists and locals in Armenia

This has gotta be one of our favourite points. We really like how there’s no discrimination between tourists and the locals here in Armenia! Tickets to all attractions in Armenia were priced the same for both locals and tourists, unlike in some other countries such as Iran where the tourist price is almost 10 times more expensive than the local’s price. Actually, it’s free entry to all the churches in Armenia, which is pretty amazing actually. In Central Asia and Iran, we had to pay entrance fees to enter their mosques. Only certain attractions such as the Garni Temple below requires a small fee for the entrance ticket. 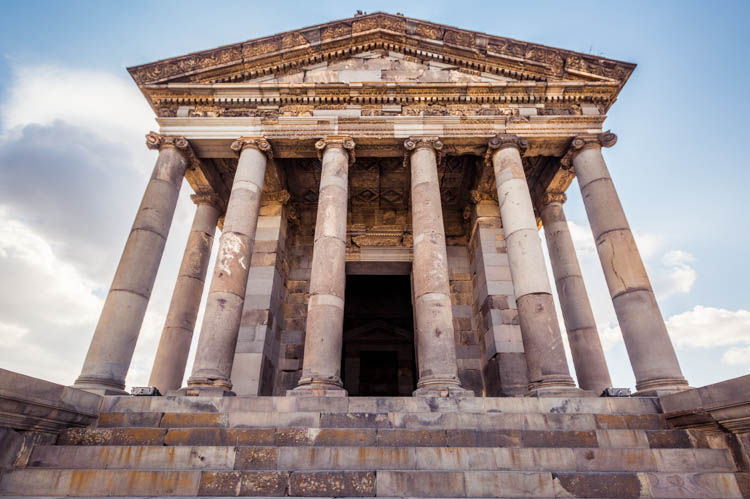 RELATED NEWS:
» We will never forget | France President on Armenian Genocide
» How many people died in the Armenian Genocide?
» A Talk by Dr. Claude Mutafian “From Ararat to the Carpathians”
» What is the Armenian Genocide?
» The Genocide memorial in Yerevan
» ONEArmenia Launches Project to Support Local Grape Farmers in Armenia
» The Great War changed religion and society, but not enough
» 12 Interesting Facts About Armenia That You Might Not Know
» How many people died in the Armenian Genocide?
» Athens to host exhibition "Armenia: Soul of Ararat"
» Expert: Armenia will soon become the world's most densely packed place when it comes to quantity of S- 300 anti-aircraft missile systems
» Bread and Bakery products drop in price: National Statistical Service
» Shavarsh Kocharyan: Armenian-Indian relations have a big undeveloped potential
» Armenian EyeCare Project and Orange Foundation sum up partnership results for 2015
» French Parliament to vote on bill criminalizing denial of Armenian Genocide on December 3
FOCUS IP TV - LIVE