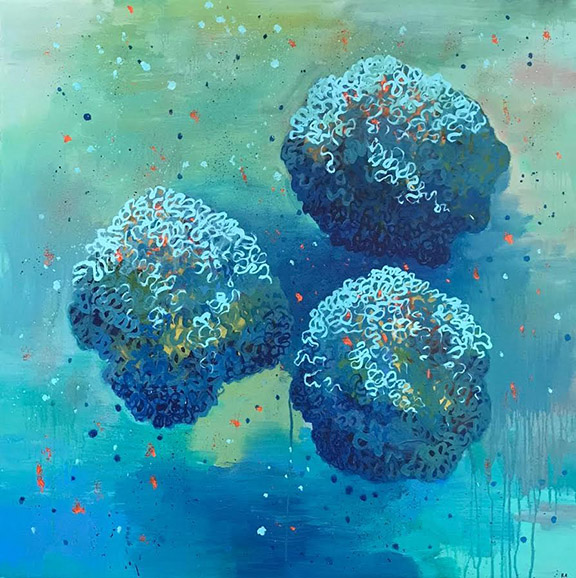 GLENDALE—Tufenkian Fine Arts is honored to present Ruben Amirian: Selected Works, a new exhibition featuring selected works by Ruben Amirian. The show will be on view from June 22 – July 12. The gallery is located at 216 S. Louise St., Glendale, CA 91205.

Art roams freely in Ruben Amirian’s home and studio. Amirian’s paintings, as well as art collected by him and his wife, Tamar, intermingle on the walls throughout their house. The most influential of these paintings are two pieces painted by his mother when she was a young artist; Ruben’s exposure to drawing and painting began with her. He states, “My mom taught me the skills she knew, and then [painting] became something like breathing. Even if I wanted to stop painting now, it can’t happen. All I know is that I cannot live without painting. I wake up early in the morning, and I go to my studio. I just have to paint, that is what I do.”

Amirian’s aesthetic signature began to take shape in Tehran, when he came across a newspaper article about Picasso. Amirian explains, “I did not fully understand what Picasso was doing [with his art], but I picked up the idea [from him]—that it is possible to bring something new to art. And, from there, I started exploring abstraction.”

His interest in abstract forms compelled him to travel to the United States; first arriving in Baltimore, Maryland in 1962 and making his way to Howard University, in Washington D.C., where he studied architecture and city planning. But art was never far behind.

Near his architecture desk, he displayed a piece of his artwork, which was a sheet of newspaper he used as a canvas to paint. Amirian describes the rest of the story: “Professor Fry, came to look at my work and [the sheet of newspaper caught his eye] and he asked, ‘Who did that?’ I said, ‘I did it.’ He said, ‘Mr. Amirian, you are an artist. Don’t you ever forget that.’” This moment shaped his architectural practice, and he became a design architect, focused on “design, the creation of space, and human habitat.

In fact, for Ruben Amirian, art and architecture are complimentary, “I designed many single family residences and my designs [were focused] on making the house artistic, not necessarily to look pretty from the outside, but how do you live in it? How do you feel in the space? Where do you hang your paintings? How does this room look like from the other room? These are all artistic things.”

Renowned African-American abstract artist, Sam Gilliam, further encouraged Amirian’s artistic journey, alongside his architectural career. He recalls the 1960’s and remembers Washington D.C as a hub for modern art; “there were many great artists; one of the artists was Sam Gilliam. I do not know how I got the courage to call Sam Gilliam and asked him if he would look at my artwork. He said, ‘Sure, it will be my pleasure. ‘He came to my studio, viewed my work and said, ‘You got something going. Don’t give up.’” 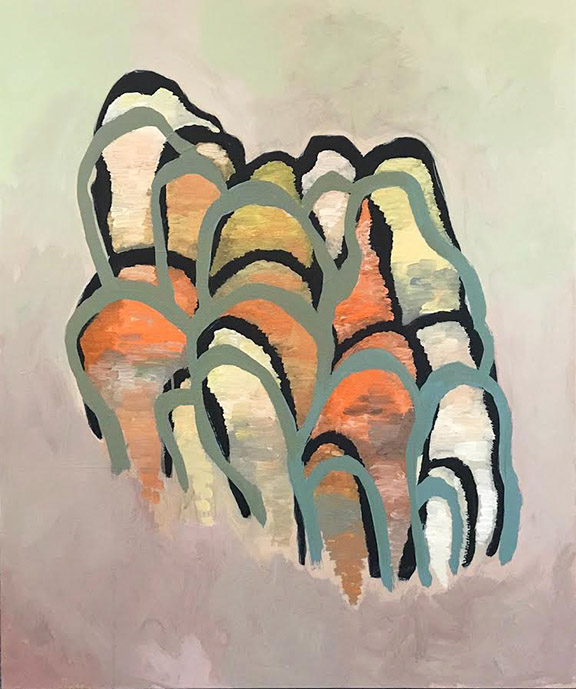 Amirian did just that; he built a life, fueled by love of line and form in architecture, and the love of abstraction on his canvas. Tamar Amirian, his wife, always encouraged him, “Do your art. Do your art,” continuously nurturing his artistic endeavors—she is the foundation of their shared lives. Amirian describes Tamar as having “a good eye [for detail], good taste, and aesthetics.” When I ask Tamar what she thinks of art, she says, “[Art] has become part of our lives. It is the enjoyable part of life; many things are art, art is art in itself; any beautiful creation is an art.”

She fondly remembers the 13 years they lived in Washington D.C, spending hours together in galleries and art spaces. Amirian says, “When [we] go to a gallery, [we] come out of the world’s pressures and stressors and enter a different world, the world of artists, the world of sculptors.”

It is this love, Amirian’s love of Tamar, that inspired a particular series of work titled, the T’s Garden. These pieces feature a whimsical representation and deconstruction of the letter T in the Armenian language. The image of the letter is hidden among colorful backgrounds and abstract forms in motion. If you take a closer look, the Armenian T is evident. The T’s Garden series is an endearing appreciation of art and love manifest. The play with the Armenian letter T, further inspired Amirian to recreate all 36 letters with a touch of whimsy, in his Alphabet piece.

In Amirian’s work, love is a significant impetus for creation, but even more paramount is the use of color. “Color is really important in my paintings; color plays with people’s emotions, so [using color] is just something that you cannot learn; I love to play with color, I like it when the brush enters the paint. That moment is really important. I play with color with the joy of a child,” he explains. Amirian mainly uses acrylic paint, but also works with oil pastels, charcoal, and watercolor.

He paints until he feels good about the color juxtaposition within and upon the abstract forms. He remembers abstract artist, Esteban Vincente’s quote, “Color makes us feel like seeing. “

The essence of this artistic insight is felt immediately upon entering Amirian’s art studio, adjacent to his house of paintings. The studio is enveloped in color. The doors and walls are adorned in bright shades of yellow, blue, green, and pink, with paint leftover from his artwork, along with various abstract shapes interacting among inspirational quotes. In the middle, near a wall, sits his easel; encircled by an artist’s essential tools of creation, in close proximity of past work stored in pull out drawers. “My studio is small, but it is mine, I have a place to practice my art. It is my sanctuary,” he says.

While in his scared place, he showcased several canvases that will appear in an upcoming exhibit at Tufenkian Fine Arts this summer from June 22 to July 12; the show will feature his work from 2016 to the present. He proudly points to his Persian Gardens series, deconstructed forms suggesting garden, plants, greenery, water, and a hint of architectural lines, all in a sense of motion. Amirian describes his work, “In Iran, even in the desert, there were gardens and the water element was paramount in such a hot and dry place. Inspired by all this, I started painting gardens in the abstract form.” The Persian theme continues, with a repeating likeness of the curves of a mosque becoming ethereal and fantastical, placed upon a colorful background.

Sometimes, while in his studio, Amirian comes across a pile of previous work that he does not like and tears several canvases, recreating the artwork by highlighting the ripped ridges along the canvas. Thus, he does not always have a theme he wants to paint. His work is also spontaneous. He is hopeful that viewers will pick up on an Amirian line, or his sense of color and playfulness.

This is evident in the Rushing Thoughts series and the Burst series. While, these pieces are referred to as being part of a series, they should actually be considered as a collective of work, pointing to a shared essence of Amirian. For example, the surface of water is expressed, not as a thing, but as the spirit of water. There is also the circular power of the Armenian infinity symbol floating in motion, followed by three, rough-hewn whimsical masses surrounded in bright blue, inviting the viewer to determine the meaning.

The spontaneity continues inside, as we leave the studio guided by the wind chime. Amirian also showcases his mixed media work, containing a quality of paper-mache. Amirian uses pencils until the very end of the tip, right before it reaches the eraser top. He remembers that pencils were not readily available in the city he lived in, while growing up in Iran. His father would bring pencils from Tehran. In homage of pencils, he created a sculptural piece, fusing used pencils together, creating a continuous pattern, and forming a container infused with color; an instant household item.

This continues onto books, a line of books hangs above the patio threshold. The books are open, with the spines facing away from the wall. Each book is painted in unique hues, adorned with abstract forms. Amirian elaborates further, “I love books. When you read a book, you put it away in drawer and it ends. I always wanted to see the books, and I started playing around with the idea.” It is as if the books are alive and breathing, again seeming texturized like paper-mache, transforming the books into new pieces of art.

In another far corner, he points to his self-portrait, a mixed media piece, gluing the actual fabric form his shirt collar right on to the painting. Amirian’s self-portrait showcases a man full of wonder, whim, love, and the joy of artistic expression. Yet, abstraction remains strong as Ruben Amirian continues to create as an abstract artist in his studio sanctuary.

RELATED NEWS:
» Narine Arakelian will Headline Armenia Pavilion at Venice Biennale
» General Manvel Grigorian Freed on Bail
» Tufenkian Fine Arts Announces Passing of Legendary Artist Garo Antreasian
» Gegam Kacherian’s  ‘Refractions’ Debuts at  Tufenkian Fine Arts
» Playwright Leslie Ayvazian Opens Up About ‘100 Lives’ and the 100-Year Struggle for Justice
» 103rd Anniversary of the Armenian Genocide to Be Commemorated in Solvang
» Dr. Garbis Der-Yeghiayan’s “Voices in Silence” to Be Presented on April 6
» Sam Grigorian @ 60 Exhibition at Tufenkian Fine Arts
» Music Review: Mourad’s Art Lends Visual, Political Dimensions to Master Chorale Concert
» Rapper Patrick Antonian is Leaving His Mark on the Music World
» Roslin Gallery to Unveil Jirayr Zorthian’s ‘The Divorcement’ Not Seen Since 1954
» Rep. Schiff Announces Winners of the Congressional Art Competition
» Heard on the trail
» Milton Glaser Is Famous for the 'I Love New York' Logo. How Did He Do With Rhode Island?
» Nastassja Kinski: Always stay with those you love, dream and never give up
FOCUS IP TV - LIVE