EAEU summit in Yerevan will go down in history 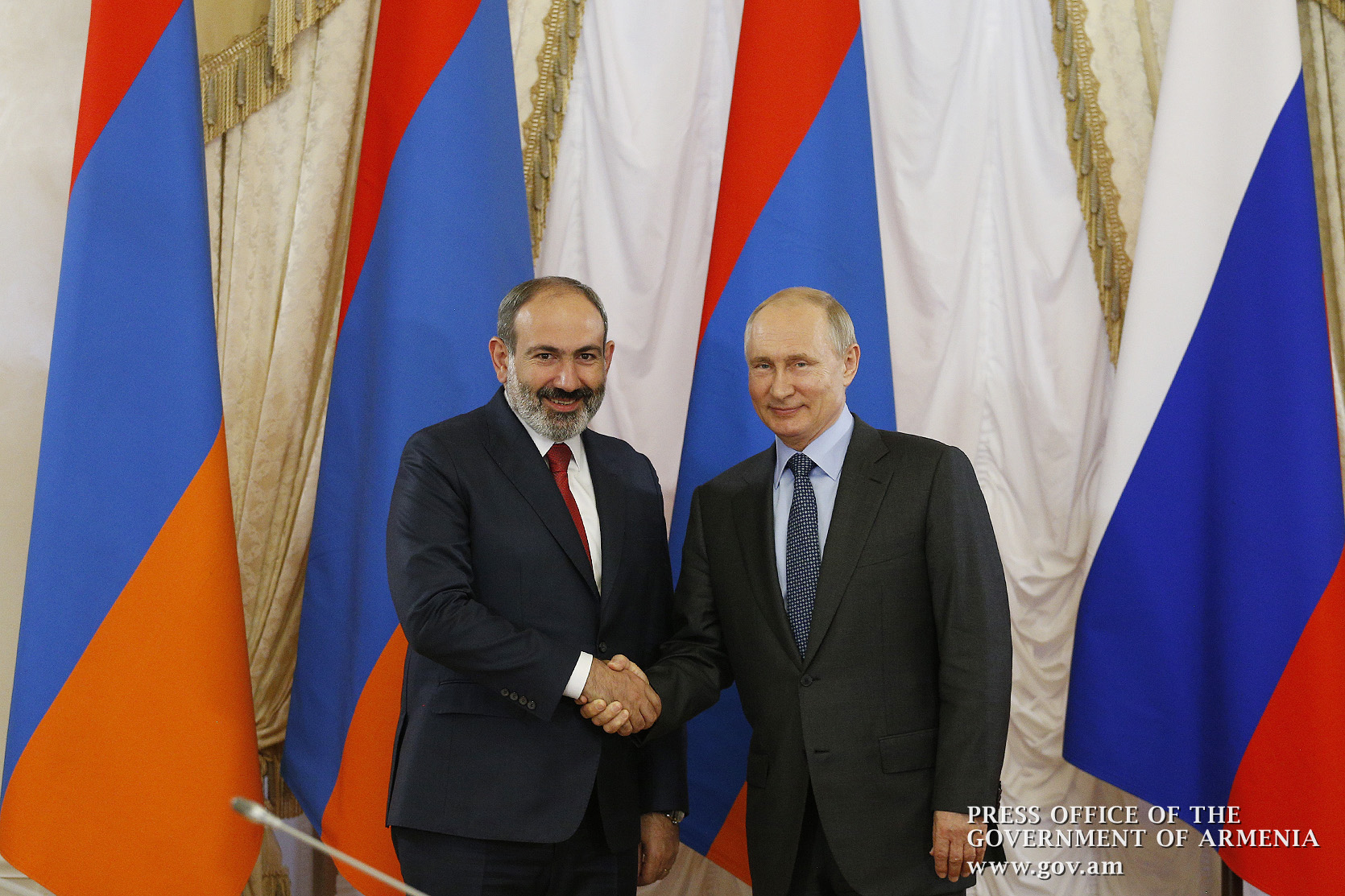 A unique agreement with Singapore, a historic event for Iran and a painful reaction of the West to Serbia’s contracts with its eastern partners - the opening meeting of the leaders of the Eurasian Economic Union already brings a lot of news. Attention to the summit in Yerevan is riveted for one more reason - the EAEU will soon be five years old.

New guests and old topics
This year, not only the countries participating in the Union will gather in the Armenian capital. Moldovan President Igor Dodon will also arrive in Yerevan. Last year, the country got an observer status at the EAEU.  Singaporean Prime Minister Lee Hsien Loong and Iranian President Hassan Rouhani flew to Armenia in advance. But Vladimir Putin's visit is of special interest. The previous trip of the Russian president to Yerevan took place almost three years ago - at the CSTO summit in 2016. And since the velvet revolution took place in Armenia, all bilateral meetings of the leaders took place either in Moscow or at international venues. So, both the political elite and ordinary people, for whom cooperation with Russia is extremely important, were waiting for Putin’s current visit.
Although this trip is primarily associated with participation in the work of the Supreme Eurasian Economic Council, Putin will also hold bilateral meetings - with Armenian Prime Minister NikolPashinyan and Iranian leader Hassan Rouhani.
Interestingly, according to The Washington Post, Donald Trump's personal lawyer Rudolf Giuliani was supposed to fly to Yerevan. But he allegedly refused, having known that he would be on the same site with Putin. However, as the Kremlin’s spokesman Dmitry Peskov noted, the Russian side "does not know anything about Giuliani’s participation or about canceling his participation.” In any case, the presidential spokesman added, this will not affect the course of the summit.
The agenda of the anniversary summit (this year the EAEU is five years old) contains traditional questions about barriers in trade. Last year, at a similar meeting in St. Petersburg, President of Belarus Alexander Lukashenko openly stated that work on this front was "prohibitively slow." The participants will also have to approve the Concept for the formation of a common financial market, the Union’s budget for 2020 and the ratio of laws in the field of transport and energy.

Singapore in the Union
An important guest in Yerevan was the Prime Minister of Singapore. He arrived three days before the meeting, this is his first official visit to Armenia. In addition to meeting with his Armenian counterpart, he will be present at the signing of the Agreement on a free trade zone with the EAEU." This contributes to stronger ties, as well as trade and investment contacts between Singapore and the EAEU," the Singapore Prime Minister's office reports. The agreement includes seven contracts, which makes it unique. The leaders of Armenia and Singapore will also sign five bilateral contracts - on investments and trade in services. Lee Hsien Loong's visit is a return one: in July, NikolPashinyan visited Singapore. Then the parties signed five agreements: on cooperation in tourism, taxation, culture and the arts, and training.

Promising commitments
The creation of a free trade zone will be discussed with Iran. A few days before the start of the summit, the preparation of the Interim Agreement was completed. Iranian Ambassador to Russia Mehdi Sanai called this event historic: "For Iran, this is a very important agreement, it will greatly benefit the economy of our country and our people, as well as the peoples of the EAEU." The head of the diplomatic mission admitted that the negotiations were not easy, but "the result is obvious."
The interim agreement will enter into force on October 27 and will be valid for three years. The free trade regime will affect agricultural products of early harvest and some goods of the construction industry. This will give Russian exporters a competitive advantage. The only concern is the pressure of the United States on Tehran. "We would really not want this to negatively affect trade between our countries,” said Veronika Nikishina, Minister for Trade of the Eurasian Economic Commission.
As indicated on the Commission’s website, there is now a dialogue between the parties on deepening customs cooperation, and the format of business partnership is being discussed. The Iranian ambassador proposed to organize a conference in Tehran for Iranian businessmen to learn about the benefits of working within the framework of the EAEU single market.

Eurasian belt
In October, another agreement will come into force - with China. The document will simplify trading procedures and stimulate the implementation of other projects, in particular, the Chinese "One Belt, One Way" (OPOP).
According to the chairman of the EEC Board, the document lays down mechanisms for expanding the interaction of the parties. Consultations between government agencies and the creation of centers for the exchange of information in order to promote the interests of entrepreneurs have been planned.
Russian Foreign Minister Sergei Lavrov noted that pairing the EAEU and the Chinese project will positively affect the region. "The EAEU and the OPOP are beginning to complement each other effectively. Their further harmonization will help lay the foundation for the formation of a new geopolitical contour in Eurasia," the head of the department said.
Beijing is also confident in the success of the cooperation. "The Chinese side is ready to continue integrating the One Belt, One Way initiative with the EAEU, and to further expand the scale and quality of trade," Prime Minister Li Keqiang said earlier.

Cheese, Vignac and Cigarettes
A free trade agreement with Serbia is planned to be signed at the end of October. As previously stated by the Deputy Prime Minister of the Serbian government, RasimLyayich, this will happen at a meeting of the Prime Ministers of the EAEU countries in Moscow.
Belgrade plans to increase exports to the EAEU countries from one billion to one and a half billion dollars. After signing the agreement, Serbia will have new partners - Armenia and Kyrgyzstan. A free trade zone with Serbia is already operating in Russia, Belarus and Kazakhstan. The list of non-taxable products will expand - it will include goat and sheep’s cheese, another 400 tons of cow's milk cheese, as well as 90 thousand liters of vignac (the Serbian analogue of cognac) and two thousand tons of cigarettes.
However, this intention met a rather painful reaction from other partners of Serbia. The Foreign Minister of Slovakia said that the signing of the agreement with the EAEU "does not bring Serbia closer to the European Union." "This is confusing. You cannot move simultaneously in several directions,” the Slovak politician pointed out. Meanwhile, Sergei Lavrov previously emphasized that it is incorrect to contrast Serbia’s relations with the European Union and the EAEU.
In 2019, it is planned to sign a free trade agreement between the EAEU and Egypt. Negotiations began in 2018, but when the real work begins, it is not yet clear. "The country will now be developing dynamically. A project to build the Russian industrial zone is being implemented there,” the head of the Ministry of Economic Development Maxim Oreshkin commented on the situation. He noted the importance of "the materials necessary for the functioning of this project to come at reduced rates."
Agreements on the establishment of a free trade zone are also being agreed with Israel. Vladimir Putin during a meeting with Prime Minister Benjamin Netanyahu noted that the process must be accelerated. The agreement is expected to contribute to the removal of trade barriers, the development of electronic commerce, and will also affect sanitary and epidemiological standards.