President Armen Sarkissian met with President of Iran Hassan Rouhani: History of our relations is a good example of friendly and brotherly relations 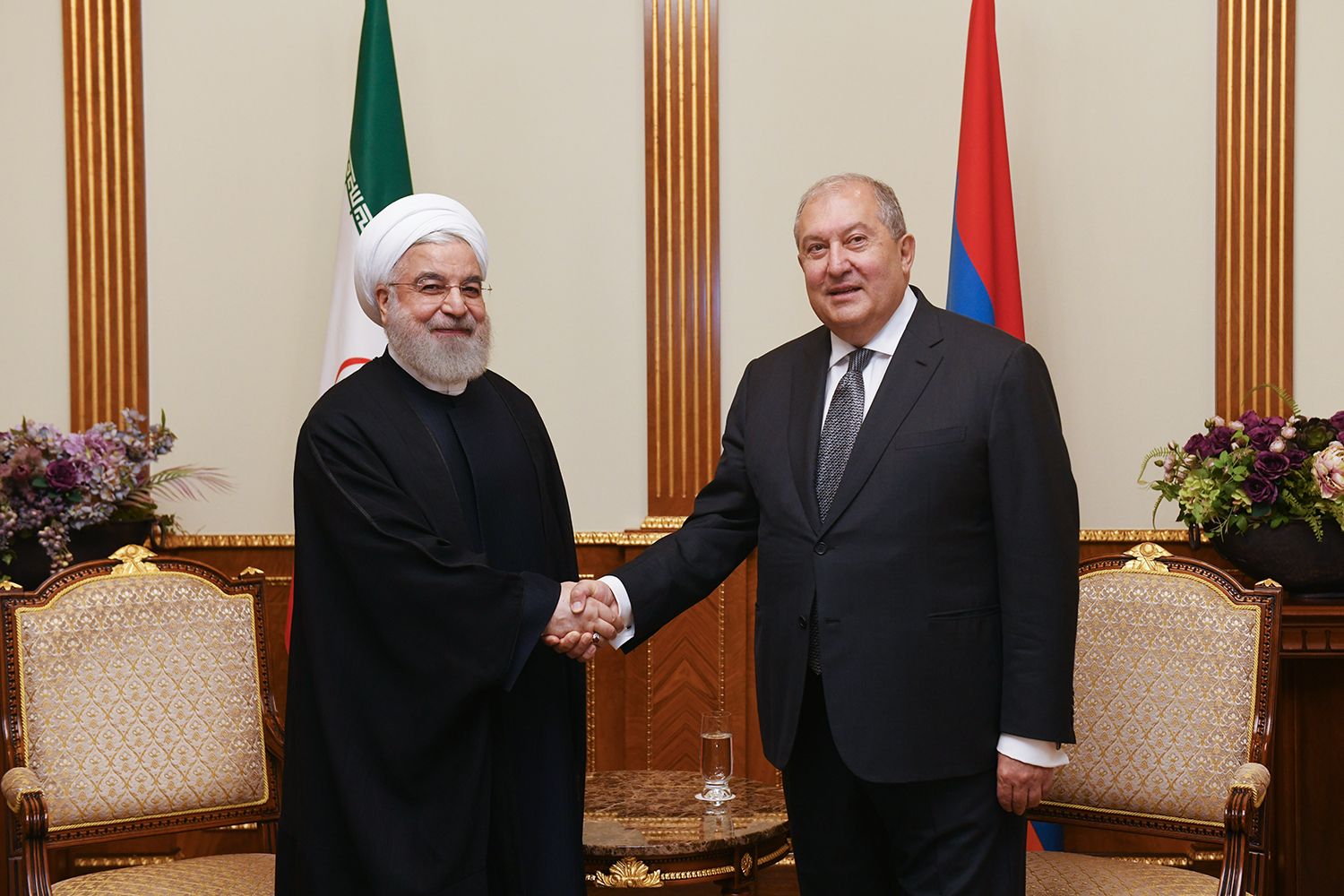 President Armen Sarkissian hosted at the Presidential Palace the President of the Islamic Republic of Iran Hassan Rouhani who has arrived to Armenia to participate at the extended session of the Supreme Economic Council of the Eurasian Economic Union in the status of the invited Head of state.

President Sarkissian welcomed the visit of the leader of the neighboring friendly state and said in particular, "Interesting times are approaching but we have been living together through interesting times for millennia and if someone is searching for friendly, brotherly relations in the world, the history of our countries are a good example of that. As President of Armenia, I am ready to bring my small contribution to that great task.”

President Rouhani thanked the President of Armenia for the warm welcome. "Fortunately, Iran and Armenia through the thousands of years established very close and cordial relations. I am very glad that today Armenia is chairing an important gathering, and I am a guest to that event,” he said.

The private meeting of the two Presidents was followed by the extended meeting with the participation of the delegations.

"In the presence of our colleagues I would like to reiterate that we had a very interesting conversation, the main idea of which is the notion that Iran and Armenia have much greater potential for cooperation than we use now,” President Sarkissian said, welcoming the high-level delegation and added that the Presidential Administration is ready to bring its input to the strengthening and deepening of the historically friendly relations of the two countries.

"Tomorrow Armenia will be chairing an important event which is attended by the leaders of the regional countries and beyond,” President Rouhani mentioned in his remarks.

"We are extremely happy with the existing good-neighborly and friendly relations between Iran and Armenia. The Eurasian Economic Union will strengthen that cooperation. In a month, we will enter the practical stage of establishing relations with the EAEU. There is no doubt that that cooperation could further strengthen our trade and economic ties with Armenia.

The President of Iran expressed hope that the summit in Yerevan would not only promote cooperation with the EAEU member states but would also deepen relations with Armenia. At the meeting discussed were also issues pertinent to the Armenian-Iranian agenda. On different issues of the bilateral relations the two Presidents agreed that Armenia and Iran possess much bigger potential than is used currently. It was noted that the visa free regime promoted the bilateral ties and tourism. In the development of trade and economic relations the two Presidents stressed the importance of the efficient functioning of free economic zones.

Noting that Armenia has great potential in the ecologically clean energy, President Sarkissian noted that cooperation in the energy field could be much broader and proposed to pay greater attention to that area especially in the light of the fact that Iran has been registering success in solar energy area.

Speaking of the transportation area, President Sarkissian noted that the modernization of the road linking Armenia and Iran will also allow for bigger transportation flows.