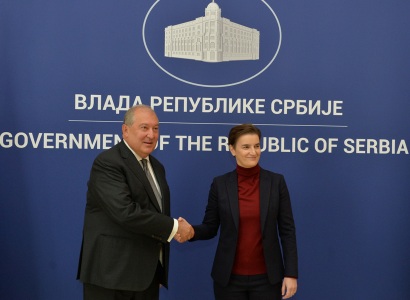 The Prime Minister of Serbia welcomed President Sarkissian’s official visit and noted that the Serbian government was glad to host the President of the friendly country of Armenia and was interested in the deepening of bilateral ties in all directions.

During the meeting, the parties touched upon the prospective directions for cooperation and emphasized that there could be mutually beneficial relations in the fields of high technologies, artificial intelligence, science, education, culture, tourism, the food industry and several other fields. President Armen Sarkissian stated that the Armenian delegation comprised representatives of information technology enterprises and the startup community who are interested in cooperation with the Serbian companies of the respective sectors.

The parties voiced hope that they would be able to achieve more impressive results in the economic sector through joint efforts, touched upon the agreement on the free trade zone to be signed between Serbia and the Eurasian Economic Union and stated that the signing of the agreement would create new opportunities for trade for Armenia and Serbia.