Representatives of the ARF, Prosperous Party of Armenia and the Homeland Party en route to the prosecutor general’s office on June 30

Representatives of opposition forces Prosperous Armenian Party, the Armenian Revolutionary Federation and the Homeland Party presented a “crime report” to Armenia’s Prosecutor General on Tuesday demanding a criminal investigation into the country’s legislature and other high-ranking officials in relation to constitutional amendments passed last week by parliament that alter the composition of Armenia’s Constitutional Court.

The parties’ representatives presented a nine-page document to the prosecutor general that, according to them, details a series of criminal breaches that they say amounts of high crimes.

After submitting the report, the three party representatives read a joint announcement and spoke to the press to expand on the concerns they had with the constitutional impasse in the country.

Last week the chairmen of the three parties met and decided to form a working group that would present a roadmap get Armenia out of the constitutional crisis. Their first act was the submission of the “crime report.”

Homeland Party member Arsen Babayan told reporters Tuesday outside of the prosecutor’s office that the document details the criminal efforts by the current regime during the past two years as they relate to the country’s judicial branch.

Babayan accused the authorities of breaking various laws to install Vahe Grigoryan on to the high court. He also pointed to Grigoryan’s effort to proclaim himself the chairman of the Constitutional Court, as well as last week’s amendment of the constitution to force three judges into early retirement and to alter the tenure of the current high court president, Hrayr Tovmasyan, against whom and his relatives the government has initiated criminal cases.

“We would like to rely on the Prosecutor General’s objectivity. The presented evidence has been more than substantiated and irrefutable. We anticipate that the judiciary will move forward exclusive through law,” said Prosperous Armenia Party representative Naira Zohrabyan, who is a member of the parliament and whose party, along with the second opposition force in the legislature, the Bright Armenia Party, boycotted the parliament hearing and vote on the constitutional amendment.

The Prosperous Armenia Party leader, businessman Gagig Tsarukyan was charged with embezzlement and election fraud earlier this month and parliament voted to lift his immunity to stand trial and be arrested. The prosecutor general’s office opted not to remand Tsarukyan to pre-trial custody but the investigation into the charges is moving forward. 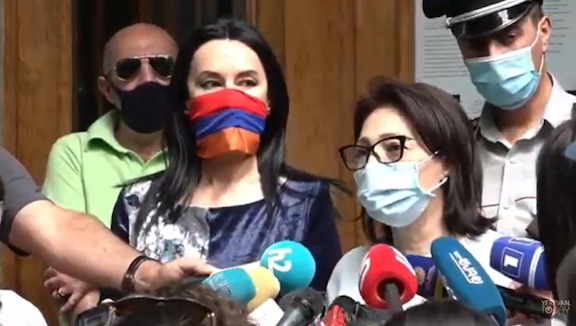 “We are appealing to the prosecutor general expecting that the only guiding principle for the office will be the law, the rule of law and justice,” added Zohrabyan.

“During the past year and a half, various political forces have provided their assessments to that realities, events and what I would call the usurping of the judiciary in the Republic of Armenia,” said Lilit Galstyan a member of the ARF Supreme Council of Armenia.

“While there have been political assessment [of the situation] the one we are presenting also have legal merit… After the political assessment we are confident that the prosecutor general’s office and judicial bodies, objectively and within their parameters, will provide a just conclusion,” added Galstyan saying that the current regime, by circumventing the constitutional order, is guilty of breaching the constitutional order in Armenia.