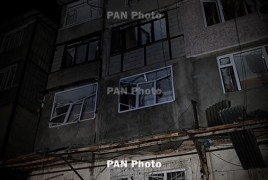 PanARMENIAN.Net - Nagorno-Karabakh's capital Stepanakert and other settlements are under Azerbaijan's rocket fire, the Armenian Unified Infocenter is reporting on late Friday, October 16. One civilian was killed in Shosh community,

The Azeri military has been targeting villages and towns from the first moments of launching a war against Karabakh.

Dozens of civilians have been killed, dozens more injured, while thousands of buildings and homes have been damaged so far.