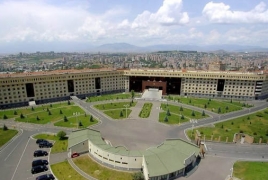 PanARMENIAN.Net - The Armenian Ministry of Defense has urged the OSCE Minsk Group co-chairs to directly address the side of the Nagorno-Karabakh conflict that actually avoids establishing ceasefire.

In a statement Friday, October 16, the Defense Ministry reaffirmed that the units of the Armed Forces of Armenia and the Artsakh Defense Army are ready to observe the terms of the humanitarian ceasefire signed in Moscow on October 10, as well as to apply the agreed ceasefire monitoring arrangements.

"In this regard, we urge the international community, in particular the OSCE Minsk Group co-chairs, to address directly in their statements and appeals to the side of the conflict, which by various means avoids establishing ceasefire and the necessary verification mechanisms for the maintenance of the ceasefire regime."