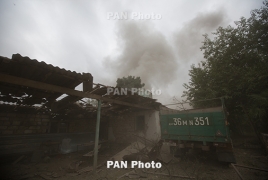 In particular, the city of Martuni as well as the communities of Urekan, Ishkhanadzor, Aygehovit and Vurgavan in Kashatagh region were shelled

Information about casualties and damage is being clarified.