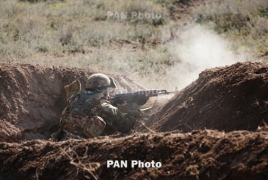 FMG.NEWS - The Nagorno-Karabakh Defense Army is waging heavy battles in the south of the frontline near the village of Ishkhanadzor, Karabakh presidential spokesman Vahram Poghosyan said Tuesday, October 20.

"The Defense Army is waging heavy battles against the Azerbaijani forces in that direction,” Poghosyan said, according to Armenpress.

According to him, the Azerbaijani armed forces have not been able to advance in the north of the frontline.