Pashinyan: Russia has reasons for anti-terrorism operations in Karabakh 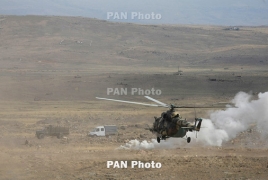 FMG.NEWS - Russia has a legitimate right and reasons to react to Turkey and Azerbaijan's transfer of terrorist mercenaries from Syria to the Nagorno-Karabakh conflict zone, Armenian Prime Minister Nikol Pashinyan has said in an interview with TASS.

Pashinyan said a number of media outlets in Arab countries have been reporting that some terrorist groups in Karabakh have been destroyed in the battlefield, after which they have dispersed in different directions.

"It is obvious that units or individuals from those defeated groups are being transferred to Russia, because I think they perceive Russia as an enemy – just like Nagorno-Karabakh or Armenia. The question is how this whole process will evolve: will Russia wait for all these elements to be transferred to the territory of Russia to start an anti-terrorism campaign?” the Prime Minister said.

He reminded that Russia was implementing anti-terrorism operations in Syria, which is quite far from Russia: "Because the Syrian militants and terrorists posed a direct threat to Russia's national security."

Armenia was the first to report on Turkey's deployment of thousands of Syrian fighters to Azerbaijan on September 28. International media publications followed suit, as did reactions from France, Russia Iran and Syria.