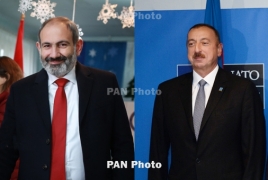 The Nagorno-Karabakh conflict should be resolved exclusively peacefully. And I am ready to make all the necessary efforts to achieve such a result, including traveling, meeting, talking," Pashinyan said when asked whether he is ready to go to the Russian capital himself for negotiations with the Azerbaijani leader.

"But we must all understand that the solution must be based on a compromise, and not on the capitulation of one of the parties."

In turn, Aliyev said that the Azerbaijani side is ready "to meet in Moscow or in any other place in order to end the confrontation and find ways for the settlement." Aliyev assured that Baku is "ready for any contacts."