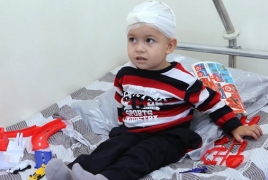 A two-year-old boy named Artsvik who was injured in Azerbaijan's shelling of the town of Martuni in Artsakh (Nagorno-Karabakh), has been discharged from Surb Astvatsamayr medical center in Yerevan, said Gevorg Derdzyan, a spokesman for the hospital.

Derdzyan revealed on Tuesday, October 2 that the child is feeling "wonderful", and will be closely watched by doctors for some time.

Artsvik has undergone a surgery on his head, and had sustained injuries to the limbs as well.