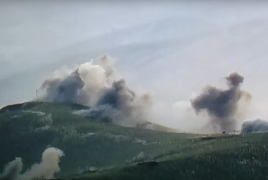 The Nagorno-Karabakh Defense Army has published footage of the destruction of Azerbaijani manpower and fortifications in the frontline.

Battles of local significance are taking place in all directions of the frontline, the Nagorno-Karabakh Defense Army said on Saturday, October 24 morning.

The Armenian troops are successfully thwarting the offensive operations of the adversary and are in control of the tactical situation, the Karabakh army added.