Nagorno Karabakh in Antiquity and the Middle Ages 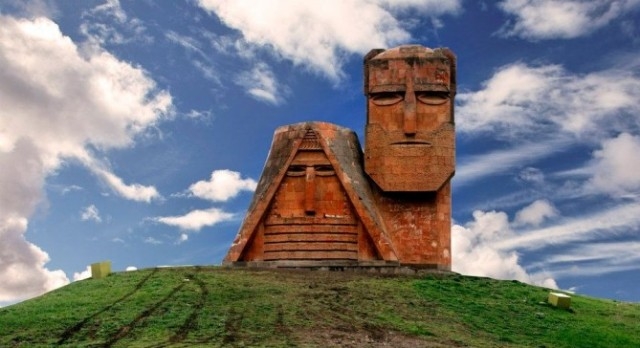 Artsakh, including today’s Nagorno Karabakh Republic, has been populated and uninterruptedly governed by Armenians, its autochthonous population, since the Roman times.

The territory of modern Nagorno Karabakh was part of the province of Artsakh when the Ervanduni (Orontid) dynasty first established the Kingdom of Armenia after the collapse of the Kingdom of Urartu in the sixth century BC. [1] Artsakh was described by the Greek and Roman authors as an important part of Armenia, which guarded its eastern frontier and provided its military with the best cavalry force. [2]

When the Kingdom of Armenian was partitioned between Persia and Byzantium, in 387 AD, Artsakh’s rulers broke away from the dominion of Armenian kings but soon re-invented their land as a separate Armenian state, the Kingdom of Aghvank. Aghvank, named after one of the grandsons of Hayk Nahapet (Hayk the Forefather, semi-mythical patriarch and eponym of Armenians), expanded its territory to the east and included the lands that modern scholars designate as so-called "Caucasian Albania.” [3]

Armenian culture and civilization flourished in Aghvank: important architectural monuments were built; Mesrob Mashtots—the inventor of the Armenian alphabet—opened his first school at the Amaras Monastery (in circa 410 AD) [4]; first Armenian constitutional edict was introduced by King Vachagan II the Pious around the same time; and lyricists, such as the seventh century author Davtak Kertogh, took Armenian poetry to new heights. [5]

In the Middle Ages, the Kingdom of Aghvank disintegrated into several separate Armenian principalities, which, by the mid-9th century, recognized the authority of the Bagratid dynasts of the reestablished Kingdom of Armenia. These kinglets were later re-assembled by Hasan Jalal Vahtangian, the builder of Gandzasar’s Cathedral of St. John the Baptist, into his Principality of Khachen. [6]