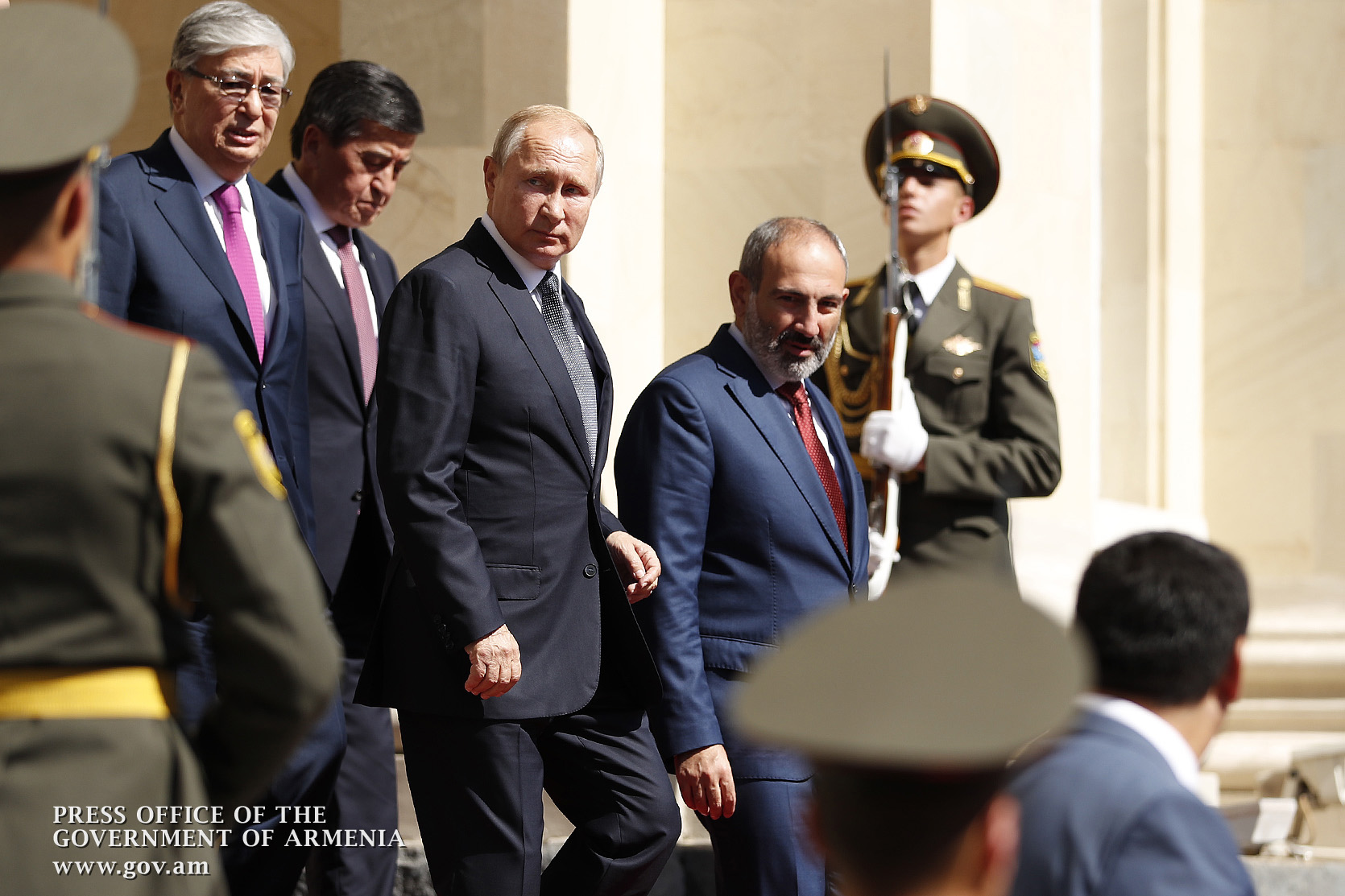 Prime Minister Nikol Pashinyan attended the regular session of the Supreme Eurasian Economic Council, which is being held in Yerevan as part of Armenia’s EAEU presidency.
Nikol Pashinyan welcomed the leaders of EAEU-member states at Baghramyam-26 in Yerevan: President of Russia Vladimir Putin, President of Belarus Alexander Lukashenko, President of Kazakhstan Kassym-Jomart Tokayev, President of Kyrgyzstan Sooronbay Jeenbekov and Eurasian Economic Commission Board Chairman Tigran Sargsyan
Following the ritual handshake and video session, the Supreme Eurasian Economic Council met in narrow and expanded formats.
Opening the narrow-format meeting, the Armenian Premier stated:
"Dear colleagues, welcome to Armenia. I am pleased to welcome you to the regular session of the Supreme Eurasian Economic Council. This is a significant event for Armenia. We are delighted to host high-level guests in Yerevan, hold a meeting of our organization’s supreme body, and thereby to make another contribution to the integration process.
As I have stated many times, we intend to participate in the EAEU as effectively as possible, while trying to improve the mechanisms of cooperation and the effective functioning of the integration area.
Before discussing the agenda items, I would like to note that it is twice as enjoyable for us to hold today’s session, attended by the leaders of Iran and Singapore, with which the Union is building trade and economic relations in a bid to set up an even broader free trade area.
Through close cooperation between all EAEU units, we managed to expand the Union’s geographical coverage, which makes today’s meeting a special one. I wish you fruitful proceedings.”
During the narrow-format sitting, the EAEU-member states exchanged views on the proceedings of Eurasian Economic Forum’s panel discussions, discussed the arrangements for distribution of import duties among the member states’ budgets, and the Eurasian Economic Commission Board’s activities.
Later, the meeting continued in expanded format with the participation of President of Moldova Igor Dodon as the head of an observer state, and guests of honour President of Iran Hassan Rouhani and Prime Minister of Singapore Lee Hsien Loong.
Prime Minister Nikol Pashinyan made a speech, in which he stated, in part:
"Dear Heads of Supreme Eurasian Economic Council-Member States,
Dear Guests,
Ladies and Gentlemen,
It is a special honor for me to welcome you all to Armenia at the regular session of the Supreme Eurasian Economic Council
Our organization, which is already 5 years old, is growing year after year. It has already proven its viability and attractiveness as an international integration entity. And I would like to note with joy that Armenia is making its possible contribution to this endeavor.
This year Armenia is the chairing country in the EAEU. We have made every effort to carry out that responsible function effectively. Today’s meeting, which is attended by leaders of Moldova, Iran and Singapore in addition to the heads of EAEU-member states, comes as the pinnacle of our presidency.
On behalf of all the members of the Higher Eurasian Economic Council, I would like to welcome President Igor Dodon of the Republic of Moldova, President Hassan Rouhani of the Islamic Republic of Iran and Singapore Prime Minister Lee Hsien Loong, who accepted our invitation to attend the session.
I am also pleased to note that for the first time an international conference on the Transitional Potential of the Eurasian Continent is being held within the framework of the session. I am confident that it will serve as an effective platform for strengthening trade and economic ties and discussing logistics schemes in the Eurasian area.
Dear friends,
I would like to specifically address those issues which, in my opinion, are important for the promotion of our cooperation and for enhancing its effectiveness. These include, for example, the measures aimed at removing barriers to the free movement of labor within the EAEU, which hinder the establishment of a single labor market.
The mutual recognition of digital signatures is among the priority issues call for special attention to ensure that suppliers could attend procurements in electronic format, and we all need to find an acceptable solution.
The integration process will be more dynamic if our citizens are convinced that such decisions are made on sensitive issues as may lead to immediate improvement in their living standards and working conditions.
I am confident that consistent work in this direction will not only enable us to effectively remove obstacles, but will also result in comprehensive integration based on the principles of equality, mutual interest and mutual respect.
We also consider it necessary to intensify joint efforts to create favorable conditions for the transfer of national currency accounts between EAEU countries. Despite the positive dynamics, there are areas, in particular the gas market, where EAEU countries’ products are traditionally offered in the national currency of non-member countries, and therefore the widening of the scope for interaction with national currencies should be one of our priorities.
Today’s agenda features the concept of creating a single financial market. This in itself is a serious step towards the formation of a common financial area, as well as a precondition for building a modern payment system within the EAEU and providing favorable conditions for currency transfers.
Dear Colleagues,
As I have repeatedly noticed, Armenia attaches particular importance to the broadening of Union’s geographical coverage in terms of foreign economic relations. Relevant agreements with Iran and China will come into force this month. Their further implementation is a priority for us in the context of real expansion of trade cooperation with third countries.
Availing myself of the fact that President Rouhani is in attendance of today’s gathering, I would like to express confidence that the Interim Agreement between the EAEU and Iran will serve as a catalyst for the furtherance of mutual trade. This will have a positive impact on the economic situation of our countries as it will bring in new value added chains.

I would like to note with satisfaction that the negotiations with Singapore are over. The Free Trade Agreement between the EAEU, its member states and the Republic of Singapore will be signed today.
Taking advantage of the fact that Mr. Lee Hsien Loong is here, I would like to express confidence that the implementation of this agreement may create a favorable environment by expanding mutually beneficial trade relations, reducing transaction costs and fostering increased economic efficiency of cooperation.
I am pleased to note that the talks with Serbia have been completed and a relevant free trade arrangement will soon be signed.
We also intend to bring to effective completion the ongoing negotiations with Egypt, Israel and India, which will benefit our union by making it a center of investment attraction.
Dear Colleagues,
In conclusion, I would like to once again welcome you all to Armenia and assure that our country will continue to make every effort to deepen integration and cooperation.
Thank you.”

The development of cooperation in the financial, economic, and customs spheres, the furtherance of the Union’s international cooperation and other issues were discussed at the meeting.
The meeting took note of the report on 2018 budget implementation. The heads of state discussed the Union’s 2020 budget. The concept of forming a single financial market was reviewed. The main areas of international activity, including the harmonization of legislation on gas transport and supply between the Member States have been approved by the EAEU-Member States on the payment of debts in the Union budget, the amount of duty paid by economic operators when applying to the EAEU. A number of working documents were signed at the meeting, including the amendments to the EAEU agro-industrial policy regulations, the Eurasian Supreme Economic Council’s relevant decision of May 29, 2014, the arrangement signed on May 29, 2014, etc.
The leaders of EAEU-member states decided to hold the next session of the Supreme Eurasian Economic Council in St. Petersburg in the month of December. 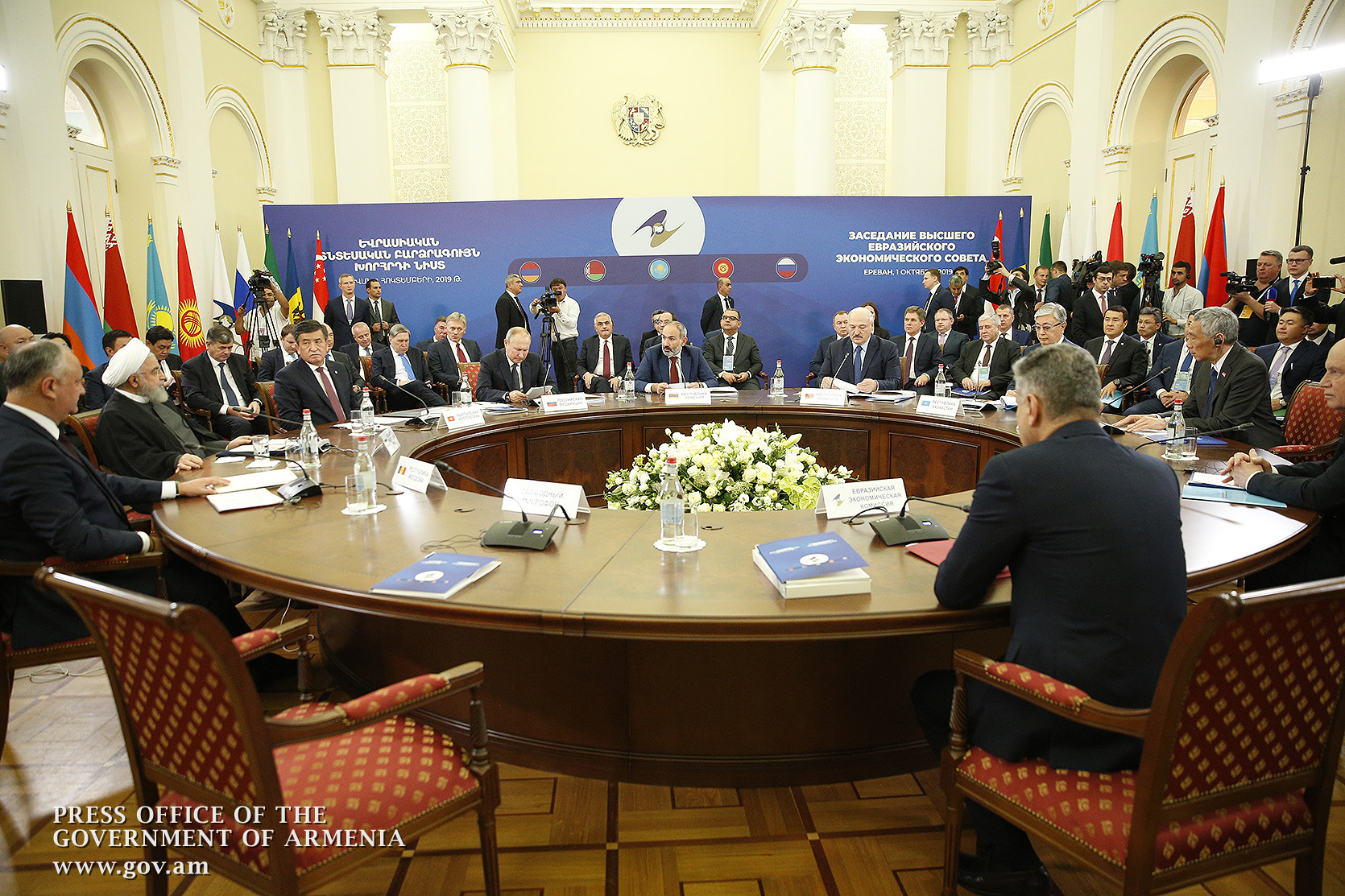