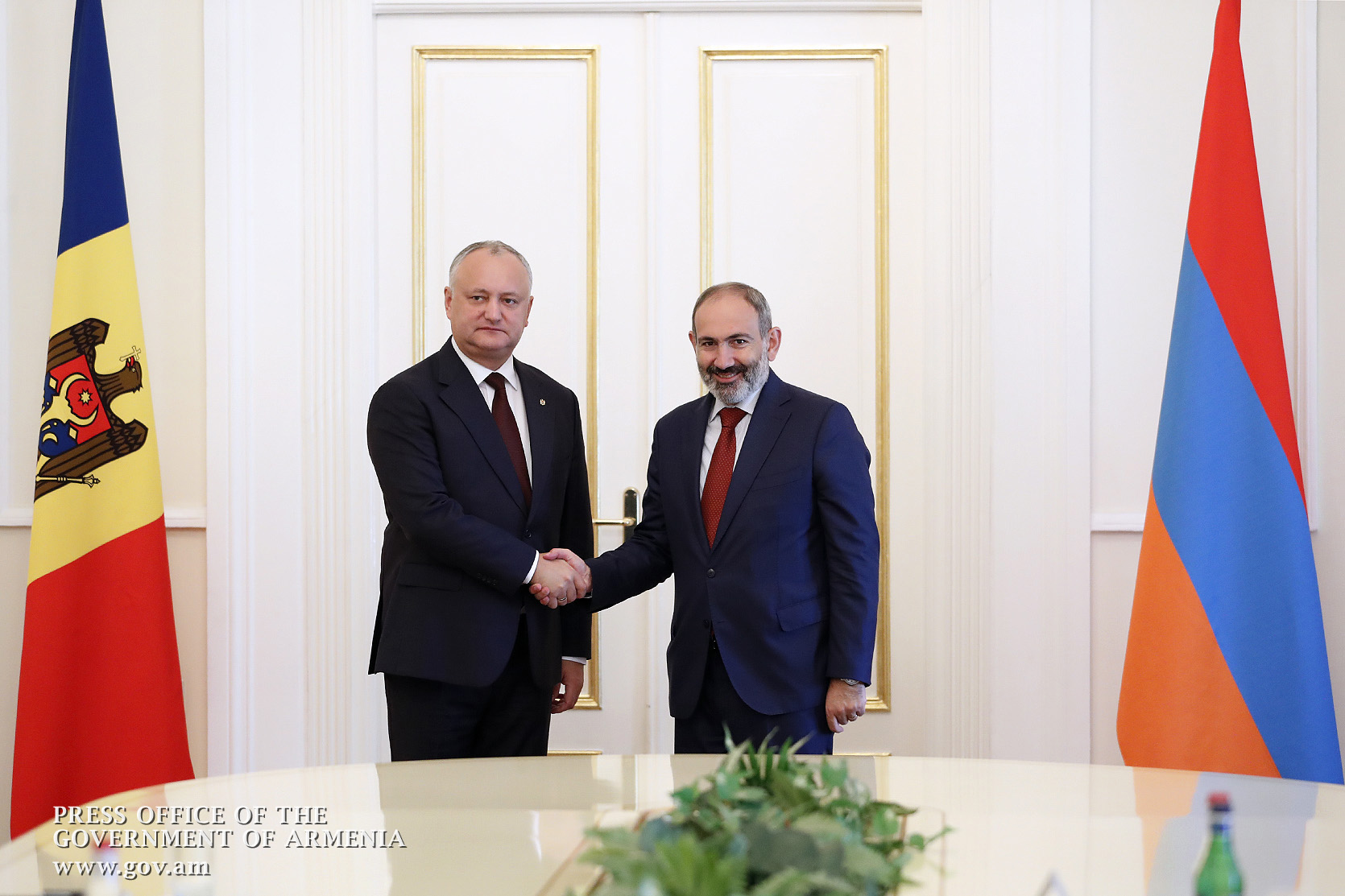 Prime Minister Nikol Pashinyan today met with Igor Dodon, President of the Republic of Moldova, who has arrived in Armenia to attend a meeting of the EAEU Supreme Economic Council.

I am glad to welcome you to Yerevan, the capital of Armenia. We met quite often during the past one year, and warm relationships have formed between us. I am hopeful and confident that our personal contacts will help enhance the relations between our countries. I am glad to have another opportunity to discuss with you prospects of the furtherance of our relations.

We must work towards strengthening our trade, economic and political ties. I think that today there are such opportunities, and we just need to tap them. Our cooperation, especially within the framework of the Eurasian Economic Union, opens up new opportunities, and I am sure that once implemented, they will lead to concrete results.”

First of all, I am very pleased to be in Yerevan again. This is my third visit to Yerevan paid over the past 2.5 years. I hope you will soon make your first official visit to the Republic of Moldova. I want to once again invite you to Moldova. You are well aware that our tow countries have traditionally maintained very good and friendly relations in all areas of mutual interest.

I want to thank you for the assistance provided to Moldova in obtaining the status of an observer country in the EAEU. On May 14 last year, Moldova became the first country to receive observer status in the EAEU.

For us, this is an exciting and promising platform. As an observer country, we have attended all the meetings at a presidential level together with my staff and colleagues. I think that we have serious potential to tap in this area.

You are probably aware that in early June this year political changes took place in Moldova. We have a new parliamentary majority; we have formed a new government, which has received and currently has the support of about 80% of the population of the Republic of Moldova.

For the past 28 years of independence, Moldova had not seen such an overwhelming internal consensus, which has been translated into a foreign policy consensus. This gives us a good opportunity to move forward in the direction of developing foreign trade and foreign policy relations.

I am also confident that our bilateral relations will be raised to a new level following my visit and after your official visit.”

Nikol Pashinyan said that specific deadlines have already been set for his official visit to Moldova, and the sides now need to work on developing an effective agenda.

The Premier welcomed the stability in the political situation in Moldova, which can promote overall progress and development of cooperation with partner countries.

Prime Minister Pashinyan and President Dodon discussed the development of cooperation between Armenia and Moldova in various fields of activity. They exchanged views on the settlement of regional conflicts, including the Nagorno-Karabakh conflict and the situation in Transnistria.

The parties emphasized the importance of a peaceful resolution of conflicts in the context of regional stability, security and development and expressed mutual support in this process.