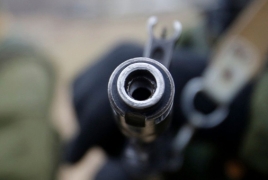 PanARMENIAN.Net - The two Armenian prisoners of war executed by Azerbaijan were residents of Hadrut, Nagorno-Karabakh authorities said on October 16, identifying them by the initials as B.H. (born in 1947) and Y.A. (born in 1995).

On October 15, a video depicting the brutal killing of the two Armenian prisoners of war by Azerbaijani troops was spreading on social media.

A criminal case has been opened in connection with the brutal murder of two Karabakh residents, one of whom was a civilian.

Their murder was committed in serious violation of international humanitarian law, during the infiltration of an Azerbaijani subversive group into the city of Hadrut, on Artur Mkrtchyan Street.