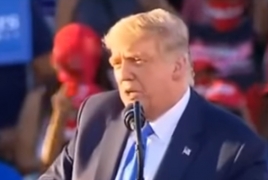 FMG.NEWS - U.S. President Trump on Sunday, October 18 campaigned in the state of Nevada, where he praised the spirit of Armenians.

"Where I just left there were so many Armenians with a beautiful flag. We’re working on some things. You’ve great spirit in your country."

Trump's words that the U.S. is "working on some things" come amid renewed hostilities in Nagorno-Karabakh (Artsakh).