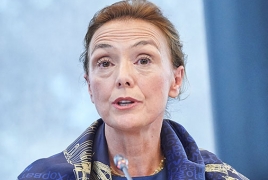 FMG.NEWS - Armenia and Azerbaijan have committed before the Council of Europe to the protection of human rights in their countries, as well as to achieving a peaceful settlement of the Nagorno-Karabakh conflict, CoE Secretary General Marija Pejčinović Burić said in Moscow on Monday, October 19.

"Regardless of politics, people living there should enjoy the same rights, democracy and the rule of law as any other European," the Secretary General said, according to RFE/RL Armenian Service.

"The authorities have a responsibility to ensure that the Council of Europe is able to freely enter these territories in order to assess the situation on the ground and provide them with the best possible support."

A spokesman for Pejčinović Burić, Daniel Holtgen said in a tweet that "after continued armed conflict last week with many civilian casualties we reiterate our concern over an escalating humanitarian crisis in Nagorno-Karabakh and call on all sides to respect the ceasefire of 10 October and return to the negotiation table."