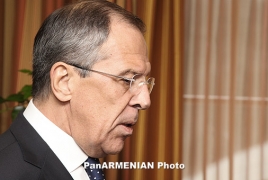 FMG.NEWS - Russian Foreign Minister Sergey Lavrov has said that Armenia, Russia and Azerbaijan may soon agree on a ceasefire monitoring mechanism in Nagorno-Karabakh.

"In order for the ceasefire to work – we have already witnessed that the adoption of the two documents did not radically change the situation on the ground – it is necessary to create a mechanism to monitor compliance with the ceasefire. We, including our Defense Ministry, are actively working on the matter with our colleagues from Azerbaijan and Armenia. I hope we will reach an agreement on such a mechanism in the nearest future.” Lavrov told a news conference, according to TASS.

"We are convinced that the most important thing now – and this, probably, does’t require much effort – is to immediately stop escalating bellicose rhetoric both between the parties (to the conflict) and by responsible international players.”

The Russian foreign policy chief maintained that it is also necessary to stop the hostilities and the targeting of civilian infrastructure.

Lavrov stressed the necessity to significantly speed up the efforts to achieve a resolution via diplomacy։ "We must urge the parties to agree on key provisions that will allow to stabilize the situation in this region in the long term."