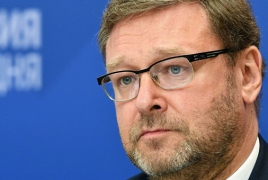 The head of the International Affairs Committee of Russia's Federation Council, Konstantin Kosachev, has said that Armenia has to officially ask Russia regarding the participation of Syrian militants in the Nagorno-Karabakh conflict for a Russian anti-terrorism operation in the region.

Kosachev noted that the danger and risks of such an operation must also be assessed, according to Lenta.ru.

The Senator stressed though that it is too early to make any predictions about Russia's actions.

Kosachev's comments came after Armenian Prime Minister Nikol Pashinyan said that Russia has a legitimate right and reasons to react to Turkey and Azerbaijan's transfer of terrorist mercenaries from Syria to the Karabakh conflict zone.

Armenia was the first to report on Turkey's deployment of thousands of Syrian fighters to Azerbaijan. International media publications followed suit, as did reactions from France, Russia Iran and Syria.