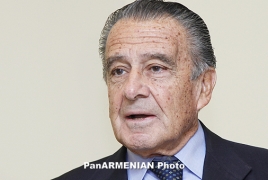 "Argentinian Armenian entrepreneur, philanthropist and member of the Board of Trustees of the Hayastan All Armenian Fund, Eduardo Eurnekian, has joined the Fund’s “We Are Our Borders” global fundraising initiative by donating $3.5 million," Arshamyan said.