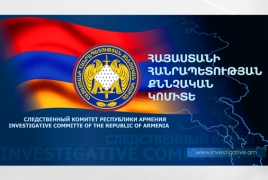 The Armenian side has two Azerbaijani prisoners of war who have been interrogated, according to Rafayel Vardanyan, Head of the Department of Criminalistics at Armenia's Investigative Committee.

"They are kept in conditions that comply with international humanitarian law, receive appropriate medical care and food," Vardanyan told reporters on Tuesday, October 27.

"During the interrogation, one of them even noted that he would hardly be treated better in Azerbaijan."

Vardanyan said 17 servicemen from the Armenian side are currently kept in Azerbaijan.

It was reported earlier that an Armenian civilian named Azniv Baghdasaryan was captured by the Azerbaijani military on October 7.