Armenia reports injuries amid Azerbaijan's aggression in the south 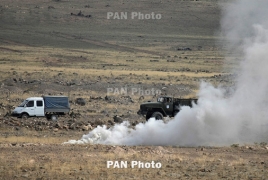 The Azerbaijani army continued firing in the direction of the southern border of Armenia, Defense Ministry spokeswoman Shushan Stepanyan said on Tuesday, October 27 afternoon. Injuries have been reported.

"The Armenian border guards took preventive action to thwart Azeri aggression in the south of the country, causing significant damage and losses," the spokeswoman added.

According to Stepanyan, Azerbaijan is using UAVs in that direction.

Earlier on Tuesday, Azeri troops used drones and rocket and artillery systems to shell the positions of the Armenian border guard in the country's southeast, next to the border crossing with Iran. One of the drones Azerbaijan used has crashed on Armenian soil.

Following the attack, the Armenian side retaliated.