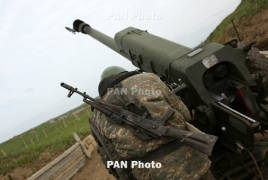 The Azerbaijani armed forces on Tuesday, October 27 used unmanned aerial vehicles and rocket with artillery systems to shell the positions of the Armenian border guard in the country's southeast, next to the border crossing with Iran, the Armenian Defense Ministry reports.

One of the drones Azerbaijan used has crashed on Armenian soil.

The Defense Ministry said the Armenian side will have to retaliate against the Azerbaijani forces.

No casualties were reported in Azerbaijan's attack.