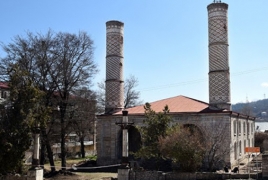 In the afternoon, Grad and Smerch rockets landed in Shushi, and the mosque was among many buildings damaged in fire.

Several years ago, Nagorno-Karabakh authorities hired Iranian experts for a major restoration project and reopened the Govhar mosque, the neighboring madrasa and the park were formally opened for tourism in October 2019.

The capital Stepanakert was targeted too, the city's air raid sirens went off at last seven times throughout the day. Furthermore, a combat drone belonging to the Azerbaijani military was destroyed near Stepanakert.